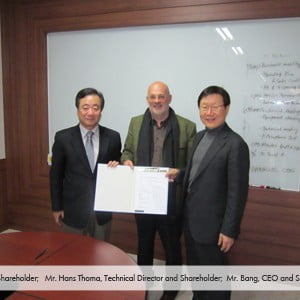 18.04.2012 – Deagu, Gyeongsangbuk-do Province/South Korea – The time has come! The 60-megawatt solar line of Jurasolar Co. Ltd., Korea, based in Deagu, some 240 km from the capital city of Seoul, was accepted by customers Jurasolar Co. Ltd. and J.v.G. technology GmbH on April 7, 2012. Just a few weeks later the new solar factory will be producing high-performance modules with very special properties: So-called „Desert modules“, these provide outstanding results at maximum temperatures (up to 145° C). The official grand opening of the Korean manufacturing facility is planned for May.

German-Korean success story
Construction of the plant began in November 2011. Only six months later, production is about to begin. The production line of Korean Jurasolar Co. Ltd. comes from Bavarian solar manufacturing specialists J.v.G. technology. It uses a fully-automated Pv module production line. This will help Jurasolar Co. Ltd., Korea, to secure its position as a leader in a booming market. Korea has been investing in the development of renewable energies for about a decade. Green Growth – Energy and CO2 reduction is an integral part of the future growth policy of the country, confirms Korean ambassador Moon Tae-Young. The most important partner within Europe is Germany; the country’s current trade volume is around 25 billion USD. You interested in used solar machines? You can call us directly or you can fill out the contact formular and we call you back and send you an offer.

How the Desert modules deal with extreme temperatures
Deagu, where four games of the World Cup were played in 2002 and the World Athletics Championships took place in 2011, will in future be the place of production of modules which work reliably at more than 125° C. How does this work without a significant loss of performance? The answer is hidden inside: The new module has an ultra-thin film with high transparency and light transmission. This film is thermally-conductive and highly electrically-insulating. „We’ll also use white glass, which is also very thin and increases the heat transfer many times. This is important for the cooling process. Our special anti-reflective coating increases the transmission and is water and stain-resistant,“ says Hans Thoma, General Manager of the J.v.G. technology Group and Managing Director of J.v.G. technology GmbH. Another benefit of the Desert modules: They have tripled the lifespan of comparable modules. Such a high-performance module provides maximum production for up to 40 years and longer. In addition, these modules are PID-free and 100% recyclable. These were important reasons for Korean businessmen Messrs. Kim and Bang to invest in the production of these modules.

Background: Korean energy policy
The power requirements of the „Next Eleven State“, as financial experts call Korea, are steadily increasing alongside its economic development. The country is considered by experts to have excellent growth prospects. This is why the fourth Basic Plan of Long Term Electricity Supply & Demand is planning the construction of numerous power plants by 2022. A total of approx. 50,000 billion won (approximately 27.6 billion EUR) will be invested. About 14 billion won will be invested in renewable energies and especially in the solar energy. After all: Despite the nuclear disaster in Japan, the country is staying true to its ambitious nuclear energy programme. Economic considerations play an important role in this. However, Fukushima has triggered a debate among the population – the public sees the current development and planning of further nuclear power plants in a poor light.